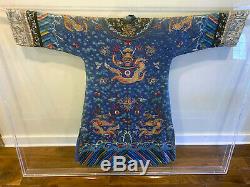 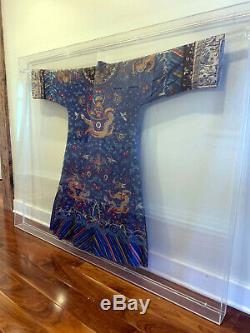 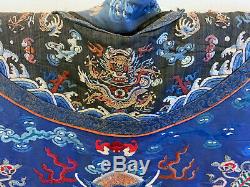 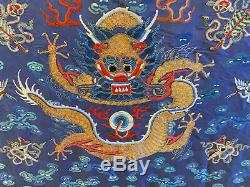 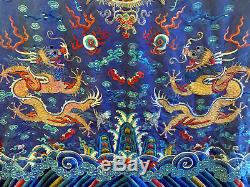 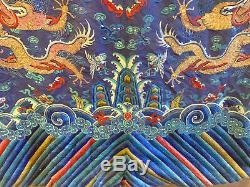 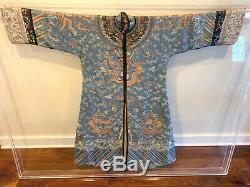 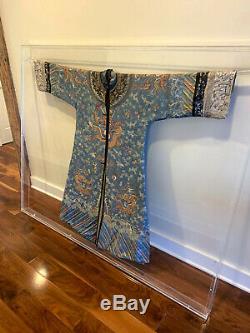 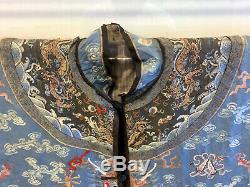 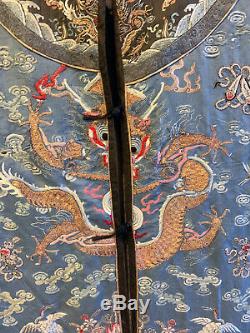 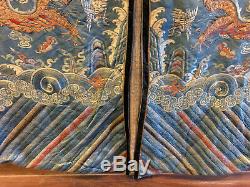 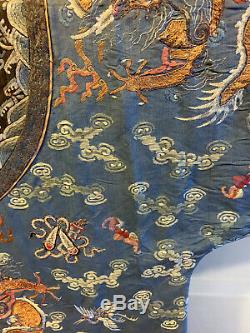 A stunning blue silk dragon robe is likely dated to mid-18th to early 19th century, the Imperial Qing dynasty of China. The robe is elaborately embroidered with gold, silver and color threads with allover designs. Eight five-claw dragons roundels with flaming pearls are featured in the front, back and shoulder among the auspicious symbols such as cranes, fans and bats.

It was further boarded on the skirts and sleeves with five-color waves and mandarins in garden pictorial. The robe was exquisitely crafted likely for a royal princess or a first rank consort with a petite physique suggested by the size and tailoring of the piece. Professionally framed in a lucite box for display. In Imperial Qing court, the dress followed a strict code. A female normally worn the same ranked robe as her father if not married or her husband if married.

The formal occasions that required a female to wear dragon robes were far less than males, therefore less female dragon robes were produced and survived. Interestingly, female dragon robe usually didn't have a front vent, which is found in this piece. The construction of this piece suggests that it likely served as an outer robe or possibly from an earlier period influenced by the aesthetics of the Ming dynasty. The addition of a rather informal and playful pictorial design on the sleeve also suggests that it was reserved for a semi formal occasion. Note that the previous owner displayed the robe with one side exposed to the light for many years.

This caused a significant but even fading on the front that somehow is rather pleasing. The back remains an original vibrant blue color and is now on display. The robe can be easily flipped with preference. Both sides are shown in photos. Measurement shown is the frame.

The robe itself is 54w x 46h. The item "Antique Chinese Imperial Dragon Robe Qing Dynasty" is in sale since Tuesday, July 9, 2019. This item is in the category "Antiques\Asian Antiques\China\Robes & Textiles". The seller is "gallery-t" and is located in Williamstown, Massachusetts. This item can be shipped to United States.