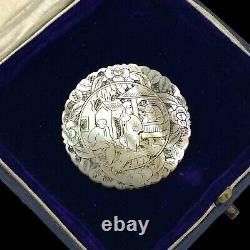 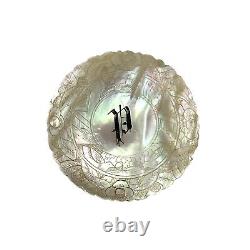 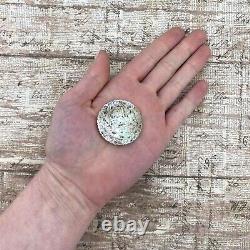 We have similar Chinese and Georgian items, which would pair nicely with this piece, for sale this week. Item Description by: Angela A. Markings: Unmarked, tested, and guaranteed. Main Stone: Mother of pearl. The stone(s) appear to be untreated, but we are not certified gemologists.

Men's or Women's: Unisex. Handmade during the Georgian era, when imported Chinese game tokens were popular for games like Quadrille in England. Entirely composed of a mother of pearl stone, beautifully carved and shaded to depict a scene of Chinese life.

This scene shows several men appearing to converse amongst several structures. The reverse of the token contains elegant floral carvings and the initial "d" in a formal script. This piece could use a gentle cleaning. There is a scratch to the reverse of the token. The price has been reduced to reflect this.

This listing is for the item only. The Georgian era is known for its hand-crafted designs, which were heavily influenced by world exploration. A few signatures of this era were high karat gold, cameos, chatelaine accessories, foil-backed stones, rivière necklaces, memento mori and mourning jewelry, and rose and mine cut diamonds. While the jewelry from this era began to see designs from all over the world, jewelry from abroad was still very expensive to acquire due to sea travel. Between age and difficulty of acquirement, pieces from the Georgian era are amazing and rare historical finds.

Chinese export jewelry became popular during the late Victorian period and persisted until the 1960s. During this period, Chinese craftsmen were considered by far the best in the world. The rich and wealthy would custom-order a piece through their local jeweler, who would send the design off to China to be made and sent back to Europe. This lengthy process was very expensive, making Chinese export pieces highly desirable, then and now. Chinese stone cutters were considered some of the finest artisans in the world.

They would spend years learning to hand-carve many different types of stones, and excelled in creating finely detailed pieces other artisans couldn't even hope to compare to. Their skill was so refined that they could even carve delicate stones like coral and jade. Chinese stone cutters were so talented that Victorian era European socialites would commission pieces from them, preferring the hefty price tag that came with such high quality work to the ready availability of Western stonework. Mother of Pearl is a beautiful type of organic mollusk shell lining that is made up of nacre, the same substance that coats pearls. It is a strong, iridescent material that is well suited to decorative arts, and has been used in art, jewelry and even architecture for thousands of years.

Mother of Pearl is highly prized for its distinct, multi-colored pearlescent glow. This item is in the category "Antiques\Asian Antiques\China\Other Chinese Antiques". The seller is "abeautifultimeco" and is located in this country: US. This item can be shipped worldwide.